Walk into any supplement store and you’ll be overwhelmed with the amount of pre-workout, performance enhancers, fat burners and muscle building supplements on the shelf, so if you’re looking for a pre-workout performance boost, where do you start? Of all of the ingredients on shelf promising to get you in the zone for exercise, there is actually only one ingredient that has received approval by the European Food Standards Authority to do so, aka Caffeine. But how can it help you?

A potted history of use

Recognised as a potent ergogenic aid (that is, a sport supplement that aids performance), Caffeine has been the subject of hundreds of scientific research studies. There has historically been quite a bit of confusion around its use in sport as prior to 2004 it was on the World Anti Doping Agency (WADA) banned list.  This ruling listed that in amounts above 12 micrograms per ml in urine, believed to be reflective of performance enhancing effects; it was not allowed to be used by competing athletes. Interestingly, this translates to around 1200mg of pure caffeine, which is well over the amount found in research to give a performance boosting effect, and amounts between 1 and 3mg/kg body weight are generally recommended for performance; Perhaps one of the reasons this ruling was overturned and now WADA has been taken off the banned list leaving athletes free to use it to support training and competition.

From mouth to absorption

On ingestion caffeine is rapidly absorbed in the gastrointestinal tract (stomach and intestine) and is quickly circulated throughout the body. Blood levels can be elevated within 15-45 minutes depending upon ingested source, dosage and individual variability; however, peak concentrations are present approximately 60 mins after ingestion. Caffeine is both water and fat soluble therefore it crosses the blood brain barrier with ease, hence the mental and focus attributions given. Like other nutrients, Caffeine is metabolised in the liver and excreted by the kidney. The amounts of circulating, metabolising and excreted caffeine varies between individuals and therefore the half-life (excretion of half the caffeine content) varies from 3-6 hours. 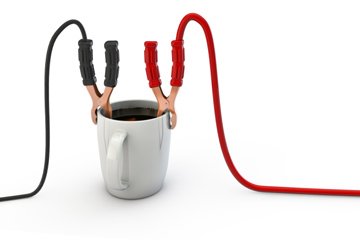 It is widely accepted that caffeine provides a positive effect on alertness and concentration and its effect on the central nervous system. To that end, caffeine has been used extensively to improve cognitive function, be that through alertness, reaction times or focus. For an exerciser the dose response will vary between individuals but as a guide, consumption should be between 1-3mg per kilogram of body weight, 60 minutes before exercise. To be honest you should feel a mental boost after the consumption of 80mg of caffeine, that’s around one and a half cups of strong coffee.

I’m sure we have all enjoyed the mental benefits of caffeine, particular in normal daily life, grabbing a tea of coffee in that mid afternoon lull but less is known to the potential benefits during physical performance. Caffeine supplementation has been shown to have positive effects on improving endurance based performance, increasing endurance capacity, and reducing the rate of perceived exhaustion. Dosages to aid physical performance need to be higher than that required for the attributes of mental performances. As a guide consumption should be between 3-6mg per kilogram of body weight, 60 minutes before exercise.

Although caffeine stacks up as an impressive performance supporting ingredient, those with high blood pressure or a history of heart disease should avoid this.  As there is a huge variation in response to caffeine some individuals will feel over-stimulated even on fairly small doses, so it you’re going to try it start with a lower dose like 80mg and gradually increase within the performance benefit range, working out what level is best for you.

Caffeine supplementation has both metal and physical benefits to many of the attributes required for sporting success; however, some areas are still under the microscope of research. For example, as yet caffeine supplementation to aid strength and power performance has mixed results, but from a practicality sense by the exploitation of the mental benefits from caffeine, will ensure that you train at least to your potential. Let’s face it, I’m sure there’s come a time that you haven’t wanting to go training, perhaps the feeling of fatigue, negativity has persuaded you to have a day off. The beauty of caffeine is that it’s a virtual training partner, giving you that push in the right direction.

Many ask me, which is the best source of caffeine? Preferring natural sources with the worry that any other form is bad for you. In truth, caffeine is caffeine; yes the method of delivery will alter the absorption speed due to digestion. A number of research studies have shown that anhydrous forms of caffeine (pills and powders) have a higher potency; in these forms higher rates of caffeine are easier to attain versus drink forms, like tea and coffee. Added to that is the practicality of supplementation, for example, you would need to drink approximately 6 cups of coffee within an hour before exercise to achieve the dose required for the physical benefits.

Is caffeine the missing link?

Who wouldn’t want to make training easy or indeed see faster training improvements? Caffeine supplementation isn’t for everyone and this article is by no means my way of promoting a caffeine only diet. I would recommend that any supplementation plan should be part of a well balanced diet; for safety limit your caffeine intake to a maximum of 400mg per day (for active individuals), don’t forget the other sources of caffeine in your diet. One thing for sure, is that caffeine will definitely not hinder your training and in the light of the evidence it can only be beneficial, so if you haven’t already tried it, perhaps caffeine is the missing link in your nutrition plan.